Todd was born in Chicago, IL and grew up in the near-north suburbs. After graduating high school, he started his art education at a local community college and then went on to attend the prestigious American Academy of Art in Chicago where he was awarded the Union League Scholarship Award. Under the guidance of some of the most talented artists in Chicago, Todd graduated in 1982. He immediately started his career as an illustrator and obtained his first commission, a football illustration for Playboy magazine. He has been working as an artist and illustrator ever since.

Todd's gallery work includes one person shows at the Morris Museum in Morristown, NJ., Broadfoot & Broadfoot, Soho, NY, Gallery MacEgan, Morristown, NJ, the College of Saint Elizabeth, Morristown, NJ, New Jersey City University, and at the Brickton Art Gallery, Park Ridge, Illinois. His paintings have also been exhibited at the Paterson Museum in Paterson, NJ, The Visual Arts Center of New Jersey, The Arts for the Parks National Competition in Wyoming, and the Society of Illustrators Annual Exhibitions in New York among others. Currently, Todd's work is being represented by Broadfoot & Broadfoot in Soho, NY and Boonton, NJ. His works are in public and private collections worldwide, including the Morris Museum, US Golf Museum, and in the collection of comic icon, Joe Kubert.

His freelance illustration career has spanned over 25 years, during which he has worked with advertising agencies, publishing companies, sport teams and other corporations where he created posters, point of purchase displays, magazine ads, magazine covers, children’s books, book covers and CD covers. His client list includes AT & T, Budweiser, Charles Scribner’s & Sons, Eddie Bauer, Field & Stream Magazine, Golf Magazine, Houghton Mifflin, Ocean Spray, Reader’s Digest, US Open of Golf and William Morrow & Company among others. Todd has also worked with numerous private organizations and individuals where he created portraits, landscapes and other artwork to suit their needs.

Todd received his M.F.A. in Painting from New Jersey City University. Currently, he is an associate professor of art at the County College of Morris in Randolph, NJ, where he teaches drawing, painting, and foundation classes. Prior to that, he has held positions at New Jersey City University, Seton Hall University, The College of Saint Elizabeth and the American Academy of Art in Chicago.

Todd lives with his family in Gillette, New Jersey. His home is situated adjacent to the Great Swamp Wildlife Refuge, which is an inspiration for much of his work. 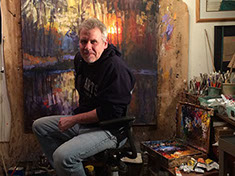